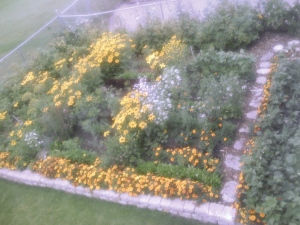 On the left is how our garden used to look. This year we reconfigured it because one of the gardeners — moi — has been “reconfigured”. We applied the “bring the mountain to Mohammed” principle since “moi-hammed” was having difficulty getting to the mountain!

To the right are the raised beds, eachtwo feet high with a diameter of five feet, easily reached from both sides. It doesn’t look very productive yet but that will change in a few weeks when the lettuce, spinach, beans, peas, parsley, carrots, cilantro, basil, mint, strawberries and onions begin to strut their stuff. This is strictly a fresh-eating garden. We don’t “put anything up” for winter.

So what does a redesigned garden have to do with following God one yes at a time? Simply this: when doing things the way you’ve always done them doesn’t work anymore, don’t quit — change. Because gardening — which I love — was getting harder due to back pain, last fall I said: “Gerry, maybe we should downsize to a condo where we wouldn’t have to worry about shovelling snow or cutting the lawn or, gulp….weeding the garden.”

Gerry’s response was to the point: “Are you crazy?! You love gardening! You wait all winter for it. You love weeding! You’ve said yourself that what you enjoy most is playing in the dirt. If we move to a condo you wouldn’t have any dirt to play in!” That’s when we stopped talking about moving (quitting gardening) and started talking about changing, ergo: the raised beds.

Back to the point — quitting versus changing: Two weeks ago while on a speaking tour with Girls Night Out I was blindsided by an old enemy I hadn’t seen for at least three years — an onstage panic attack. I’ve said before and it bears repeating: panic and anxiety doesn’t run in my family, it gallops! The Girls’ Night Out program is two-part with a break in the middle. The panic seized me as soon as I picked up the microphone and by the time we got to the intermission, I wanted to quit speaking for the rest of my life!

If you’ve never had a panic attack, it’s kind of like being in a vortex where you feel like you are spinning out of control. Your mind resembles the TV screen of yore when the antenna couldn’t pick up the signal — fuzz and static. If you have notes to read — as I did — the words blend together or jump around on the page. If you use humour — as I do — you’re not funny. You’re pathetic. You expend so much energy trying to control the symptoms  — shaking, dry mouth, racing heart — and hide the reality of what you are experiencing that you become entirely inward focused and lose the ability to engage with anyone outside yourself. Obviously, as a speaker, this is the worst consequence since the entire reason you are there is to engage!

The intermission was nothing short of painful as I tried to interact and chat with women at my book table while still in the grip of high anxiety. Fortunately a close friend’s stepmom had come to this event and we visited briefly, talking about her family and mine. All I wanted to do was sneak away and find a quiet corner where I could curl up in a ball and say: “Ok, Fear, you win. I quit. I’ve been fighting stage fright for a dozen years and I’m tired.”

I didn’t “hear” God tell me to get back onstage for the second half but I knew I would have to do it – – I was hired for the whole evening, not just the first half. So whether I said Yes to Him or Yes to my contract is splitting hairs since He is the God of all things, even contracts. The point is, I said Yes and went back.

The first thing I did was break the unwritten code that says: never show your weakness to your employer. I whispered in Mary Messina’s ear that I had a panic attack in the first half and was still scared to death. She gripped my hands, looked me square in the eye and said, “Connie, you can do this. This is what you were made for!” And with her words, I was healed. Panic fled like a vampire at the first light of dawn. Whenever God speaks truth into our life it breaks the hold of Satan’s lie.

Okay, so I didn’t quit. but did I change? The next morning as I read my Bible and prayed I heard a clear message from God: speak without notes. How counter-intuitive can you get? I’m already scared on stage and now God is asking me to remove one of my “props”! Here’s the thing, if you’re going to talk about following God one yes at a time, you’d better be doing it.

I left my notes in my hotel room that night — I had said Yes in the morning but didn’t trust myself to stay the course once I got to the event. The result? Wonderful freedom both creatively and spiritually. No fear. Joy. Victory. And a new motto: I’m saying yes.

What about you? Are you trying to follow God but something has a hold on you and you feel like quitting? Ask God to show you one simple, immediate, possible yes. Then do it.