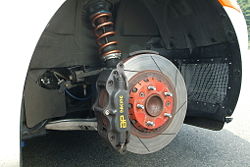 For the second, and I hope the last time in my life, my brakes failed (I almost added, “while I was driving” — duh!). This latest near-catastrophe happened yesterday on my way down a hill in Calgary after visiting a friend in the Foothills Hospital. Obviously I survived otherwise you would have been reading about me in the obit’s as opposed to “reading me.”

If you want to know the 11 (yes, eleven) logical, clear-headed, rational steps to take when your brakes fail, see this link: Good Luck! If you want to know what I did, keep reading: I had noticed earlier on the drive to Calgary that there seemed to be a lot of play in the brake pedal. Not every time, but a couple of times, I had to press it all the way to the floor in order to stop. As I descended the hill on 16th Avenue going about 60 kph I saw a long line of traffic stopped in front of me so I applied the brakes and my car slowed down. But didn’t stop. The space between me and the lineup shrunk rapidly as I pumped the brakes to no avail.

I was still going about 20 kph when I realized I wasn’t going to stop. Directly in front of me was a one-ton dump truck. In the lane to my right was a steady stream of traffic. To my left was two lanes of

oncoming traffic. In my rear seat was some precious cargo — my granddaughter Jasmine a.k.a Rapunzel. I had three choices, all of them bad:

1. Veer right and collide with other vehicles and cause a possible pileup since the rush hour traffic was all headed west, just like me.

2. Stay in my lane and crash into the dump truck; that would be like Marty St Louis giving Zdeno Chara a body check — bound to end badly for the little guy.

3. Veer into the oncoming traffic — light volume — and hope they see me soon enough to avoid a collision. I saw two vehicles approaching in the oncoming lanes, both still far enough away to see me coming and staggered so they could both change lanes and miss me without hitting each other.

I cranked my wheel to the left, narrowly missed the dump truck, bounced over the median and headed the wrong way on the lane closest to mine. The oncoming drivers honked, waved their fists, shook their heads and swung into the other lane to miss me. I managed to get one set of wheels back up onto the narrow median that divided our lanes — it was about a half-width of a car.

I went about three vehicle lengths past the stopped westbound traffic before I remembered my emergency brake — aptly named, I realized! I yanked on the hand brake. My car stopped, half on and half off the median. I tried to turn on my hazard flashers but my panic blocked me from finding the switch. I gave up searching and grabbed my phone. My hands were shaking so badly it took a couple of tries before I could dial 911 and explain my situation.

While I was on the phone with the police, a large truck stopped several meters in front of me, hazards flashing so that traffic had to flow around both our vehicles, protecting me from collision. The truck driver rushed over to my window and asked what had happened. With the help of this Good Samaritan, we got my car off the median and onto a triangle of grass on the roadside and out of harm’s way where I could wait for a tow truck and a family rescue.

Three choices — all of them bad. Ever been there? Sometimes life is like that isn’t it. You find yourself having to choose the “least worst” of all the possibilities. If every option seems dangerous or worrisome or somehow wrong and “doing nothing” isn’t a viable choice, what do you do when life forces your hand? You pray — not the “thee and thou” kind of prayer, the “Help!” kind of prayer — and then you pick one. The outcome is not guaranteed.

My 19-year-old sister died in a similar scenario. An oncoming car veered into her lane. The driver of my sister’s car had to choose: stay in the lane and collide, move over to the wrong side and risk hitting the car which might veer back if the driver was asleep, or take the ditch. She chose the ditch and because my sister wasn’t wearing a seatbelt, she died from head trauma when the car rolled.

What do you do when your brakes fail? You realize that your life hangs by a thread and we are all just one whisper away from having it end. Even though I am thankful to be able to hang around a little longer, I am also grateful to Jesus, who died in my place so that if yesterday had been my final day, I have no doubt about where I’s be today — in eternity with God. If you have some doubt about life after death, say the most important yes you will ever say — Yes Lord — and give Jesus the keys to your life. Then when your brakes fail, or you experience some other disaster, you’ll already know the end of your story — alive with Christ.