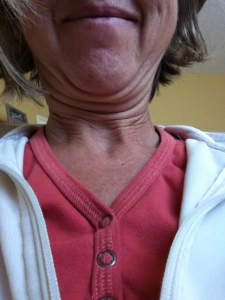 I have been obsessed with body image since I was old enough to understand there was such a thing. In elementary school I was keenly aware of my size; I matured early so while my classmates all looked like Skipper (the teenage version of the Barbie doll), I looked like Big Ethel (of Archie comic infamy). Bigger than most of the girls and far bigger than all the boys in Grade Six, I was teased and had only one friend – my cousin.

Don’t feel sorry for me; I was also a bully. I made sure I wasn’t on the bottom of the heap and did my share of making life miserable for those unlucky girls who somehow managed to have even less going for them than I did. Man, kids can be cruel!

In Junior High, things began to change for me because my womanly looks became an asset instead of a liability. That’s when body image really became an obsession. I never just hung out in the school hallway, carefree and relaxed. I sucked in my stomach, crossed my ankles in order to hide my bowed legs, lifted my chin, threw my shoulders back…sheesh!

I started dieting in Junior High and jogging in High School. I was never, not ever, satisfied with how I looked. I was always 10 pounds too heavy, too wide in the hips, too short, had too much hair, too small eyes, and so on and so on. The list was endless. And boring. And disgustingly self-centered.

Now here’s the part where the good Christian girl says, “Then I met Jesus and everything changed! I fell in love with Him and My Body and we lived happily ever after!” I wish that were true. Well, not really…the fact is, I did meet Jesus at the age of 18 and boy did He make some major changes! However, the body image issue ran deep and I now know it was one of those lifelong battles that ain’t over yet!

Paul, my current favorite Bible guy, had some lifelong issues too. In his letter to the church in Corinth he referred to one of his issues as his “thorn.” (2 Cor 12: 7) And even though he asked God three times to remove it, the thorn remained. Instead, Paul learned a valuable lesson about himself and about God, specifically, “My grace is sufficient” (v.9) In other words, we are going to have some issues in our lives that will always be there and we have a choice. We can either focus all our energy on bemoaning their presence and begging for relief. Or we can accept them and take them straight to Jesus and ask Him to use us anyway – thorn and all.

My obsession with body image has not stopped me from following God into living the dreams He has for me. If anything it has kept me coming back to Him over and over for healing and help and strength. My thorn is a constant reminder that I need Jesus every day. All day. Especially now as I watch with a mixture of horror and relief while my body droops and sags and folds over on itself creating roadmaps of history on my face and neck.

“Your neck is wrinkly Gram,” said Jasmine, my six-year-old granddaughter when we both bent over to peek in the oven window at the rising muffins. “Wrinkles are ugly right Gram?” Her little piping voice made it sound like she was announcing her favorite color was purple. “That’s okay though because when I’m a Gram, you’ll be dead!”