So here I am in Millbank Ontario, in the heart of “horse and buggy” Mennonite and Canadian Amish country, eating a home cooked dinner of liver and onions at Anna Mae’s diner and what do I see on the top shelf of a Living Books spinner? Murray Pura’s newest release, The Wings of Morning!

“I know Murray!” I bragged to my friends, Dianne and John Haupert, the couple who are graciously hosting me this week in their home in Hawkesville. “He is a terrific writer,” I say. “And this book is his first foray into the Amish genre. It’s a great read too!”

I whip out the i-phone, snap a photo of Murray’s book alongside Beverly Lewis’s books — Beverly is the reigning queen of

Amish fiction — and email it to Murray. He replies immediately asking my whereabouts and why-abouts. I tell my friends that I recently read this book and wrote a glowing review of it for the publisher’s website.

Murray was good enough to consent to a blog interview about this book as well as give a sneak preview of his future projects. You can read his comments here:

1. This is your first novel about the Amish and quite a stretch from your previous work? What is it that attracted you to this genre?
Amish fiction and works about the Amish that are not fiction are very popular right now, both in Christian & nonChristian circles. My editor challenged me to write a story that was engaging along Amish lines. At first, I wasn’t interested. But after some research I realzied the Amish were more than butterchurns, barns, buggies & the color black. They are quite a counter-cultural force in Canadian & American society in their quiet way. Not only because of their stance on technology. They have a very nonviolent approach to life.
2. You set the novel during a window of time where the Lapp Amish had not yet settled on their official position regarding “flying machines” even though they had already spurned the ownership of automobiles and telephones. What is their current position on flying and when was that decision reached?
The Amish may use a plane for short flights but not own or pilot one. There are variations on this rule from one Amish community to the other. Their decision against electricity was made in 1919 when it was possible to get hooked up to the grid for the first time in Lancaster County, Pennsylvania. By this time the plane had become more common and was considered out of bounds about the same time, 1919/1920.
3. The book’s hero, Jude Whetstone, is a man of courage, honour and principal. Did you base his persona on anyone you know?
I think in Jude’s case I had him do what I hoped I would do if I were Amish and found myself in a situation like his.
4. The heroine, Lyyndaya Kurtz — by the way, how do you pronounce that? — is a complex mixture of submissive Amish girl and daredevil high flyer. How believable is this kind of woman? Is there someone you know who inspired this character?
Lyyndaya = Lin – day – ah. You have to bear in mind that her family converted to The Amish Way. They’ve only been Amish for a decade. Half her life she may well have been Christian but she was certainly not Amish. So the daredevil not-so-submissive streak would have develpoed then. As a young woman she has to try to reconcile this part of her with what is demanded of her by the Amish. That’s the struggle, that’s the tension. Her character is believeable for this reason – she’s half Amish and half not Amish. I suppose every character is based a bit on someone you’ve met and her daredevil side is certainly inspired by some of the young women I’ve met who are downhill racers or skydivers.
5. This is not your first book about war. What is it that compels you to set your stories in wartime?
I suppose because it requires people to make life or death choices and other hard decisions not usually required in peacetime. Under such circumstances, people are tested in a way that reveals what really matters to them and, in essence, who they are and whether or not God has truly affected their lives in a way that determines their actions.
6. Jude’s decision to go to war in the face of almost certain shunning from his Amish people even though he claims he is following God’s will illustrates the tension between an individual’s relationship with God and his relationship with his Christian community. The two don’t always line up. Can you think of a modern day example that would place us in a similar position, ie: standing alone for our faith and possibly rejected or judged by our church?
I think if you gave blood to specifically help gay people with AIDS there might be church communities that condemned you, even though you did it in love for the person, not necessarily in support of a gay lifestyle. I think if you supported euthanasia for those in great pain with terminal illness you might get attacked as well. Certainly if you came out and said abortion was a national tragedy but it needed to be legal and it needed to be safe a number of church groups would be very upset with you, even though you acted out of love and compassion for the women and not in total support of abortion itself.
7. I love the way you weave a lot of Scripture into the body of the work in such a natural way. The bible passages don’t break up the flow of the story but rather add depth to it. This is something new in your writing. How difficult was it for you to do this?
It’s new because I’m with a very good Christian publisher when it comes to Harvest House in Eugene, Oregon. Secular publishing firms would never give me that sort of freedom. In addition, I’ve permitted myself that artistic licence since I know I’m writing for a largely Christian audience and not so much a seeking one or one that might react negatively to the use of Scripture. Writing in this genre is a breath of fresh air. It was very easy to do because that is how I weave Scripture into my own thoughts and life and now in Christian fiction I am free to express it.
8. Do you have any more Amish fiction in the works? Can you give us a sneak preview? 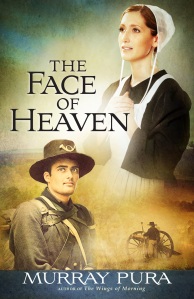 I have all kinds of Christian fiction in the works now, some Amish, some not. The next book that will be released is the second in the series that began with The Wings of Morning and it is definitely Amish. The series is about Americans and Amish and is called Snapshots in History. The same characters don’t carry over – though we do see the ones from The Wings of Morning return in the third book in the series – because the second book takes place during the American Civil War, 1861-1865. Here we see a conflict in the young people of an Amish community when they experience the harsh work of slavetraders first hand and agonize over whether to break ties with their families and church and take up arms against slavery. Amish farmer Nathaniel King is deeply in love with a young woman named Lyndel Keim, the scrawny sister of his best friend who has grown into a flaming beauty. She returns his love, surprised by his affection and also by her own feelings towards him. But while their relationship develops the war looms larger and larger and they both struggle with how they should respond to to a Confederate nation that enshrines slavery in its Constitution. Then the day comes that some told them would never come – the battle between North and South and Slavery or Freedom crosses the border into Pennsylvania in July of 1863.
The Face of Heaven hits the bookstores, online sites, and Kindle on July 1st.