We Baby Boomers are so sure the universe revolves around us that we refuse to get old: is 60 is the new 40? Heck no!

I turned 60 recently (ok, last year) and celebrated with a big party where it was, of course, all about me! Typical Baby Boomer. I arrived at the party with Big Hair and Red Heels–the same red heels I wore the night I hurled myself off a stage during a speaking gig in Georgia.

After that bone-jarring, elbow-breaking free fall, I gave away every pair of heels I owned…except the red ones. I never wanted to forget. It was like the half-smoked, lipstick-stained cigarette a friend kept for years, in an ashtray on the living room shelf as a reminder that it was her last smoke. And it was. 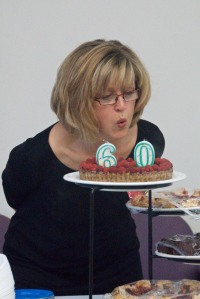 At 40 I thought I could take on the world. Heck, I could still jog without leaking. I still had young children at home. I could hardly wait for them to grow up and clear out so I could focus on my thing.

At 50 I became a grandparent and booted my youngest child out of the nest–he was 19 and needed a nudge. He soon joined the human race, worked hard, found a fabulous wife and produced two adorable grandchildren (# 5 and #6). His older sisters gave us #1 – #4. Bless them.

Probably the best reason that 60 is not the new 40 is because at 60, we are no longer the same person we were 20 years ago. Thank you Jesus. We’ve had time to learn and grow and change and, dare I hope, improve?

What about you? Are you embracing the changes new seasons of life bring? What are you glad about in your current decade?

Time marches forward, never backward. Remember fondly (or strategically forget) what was. Celebrate (and accept) what is. Look forward to what will be.